Our Emerging Writers’ Group (EWG) is entering its sixth year with a new intake of six writers.

The EWG is an opportunity for the Bush to develop relationships with new playwrights who are at early stages in their careers. Our aim is to support writers over a sustained period of time and help encourage work on a new full length play. The programme is an amazing way of bringing important new voices into UK theatre.

At the Bush we are committed to making our talent development programmes accessible and opening our doors to new writers. We’re thrilled that five of this year’s Emerging Writer’ Group come from our unsolicited submissions process, which is open to playwrights across the UK and Ireland, and five of them are also first time playwrights.

“I loved my time on the EWG. It felt great to have the time and space to develop among other emerging writers and the Bush team were incredibly supportive throughout.” 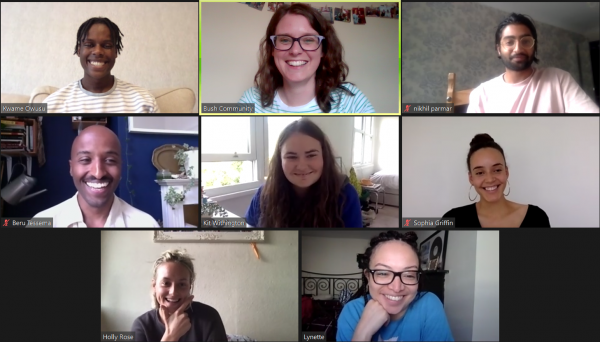 Meet Sophia, Holly, Kwame, Nikhil, Beru and Kit. There’s so much to say about our new Emerging Writers’ Group that we’ve asked them to introduce themselves along with their favourite piece of writing

Sophia Griffin is a theatre maker, writer and performance poet based in Birmingham. Our Associate Director saw a reading of her piece on Zoom and was hugely impressed by the humour and truthfulness of her story.

Holly Rose Hawgood is an actor/writer from South East London. She enjoys writing in her own accent/dialect and is hoping to get more working class voices and stories on to the stage as well as into the audience.

Kwame Owusu  is a writer, director and actor who alongside all of this is also studying for an MFA in Theatre Directing at Birkbeck, University of London.

Nikhil Parmar is an actor and writer from Manchester who is new to writing. Last year he graduated from Emmy-winner Andy Riley’s mentorship scheme for emerging comedy writers.

Beru Tessema is an actor, writer and director making work both for stage and screen. He was born in Ethiopia and raised in London where he is now based. Beru was shortlisted for the 2020 Papatango Playwriting Prize.

Kit Withington is a playwright from Manchester. In 2015 her debut play The View From Down Here was part of Ovalhouse’s First Bites season.

EWG is possible thanks to the support of Wychwood Media