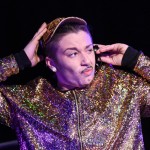 Milk Presents is a Bush Associate Artist company for 2017. The company make daring, accessible performance that transcends gender and sexuality. It is made up of artists Ruby Glaskin, Adam Robertson and Lucy J Skilbeck.

Milk Presents formed at the Royal Central School of Speech and Drama in 2010 and went on to become an Associate Artist of The Point Eastleigh in 2011 and an Associate Company of Derby Theatre in 2015.

Their most recent production Joan (Scotsman Fringe First, Stage Edinburgh Award, Spirit of the Fringe Award), a drag king play about Joan of Arc, was co-produced with Derby Theatre and is touring Spring/ Autumn 2017. Past productions include Milk Presents Self Service (2014), A Real Man’s Guide to Sainthood (2013), Bluebeard A Fairytale for Adults (2012).

Milk Presents curate club nights, symposiums, workshops and community projects, including creating a cabaret for the Welcome Collection’s Late event: Macho in April 2017. Their current work is commissioned by the Jerwood Home Run Commission with Camden People’s Theatre and will run there three weeks in September 2017. Milk Presents are delighted to become associates of the Bush Theatre and to extend the reach and ambition of the company alongside such an intrepid and exciting theatre.