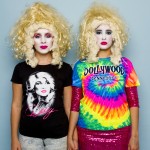 Sh!t Theatre is a Bush Associate Artist company for 2018. Sh!t Theatre is made up of the multi award-winning duo Louise Mothersole and Rebecca Biscuit. They have been told many times by theatre professionals to change their name.

They have won a Fringe First, a Total Theatre Award, The Arches Brick Award and a Three Weeks Editors’ Choice Award. They won four star reviews from critics for their sell-out show Letters to Windsor House, have been shortlisted for the 2014 Amnesty International Freedom of Expression Award and 2015’s Women’s Hour was one of the Daily Telegraph’s ‘Top Five Plays to see in Edinburgh’.

They are also associate artists of Camden People’s Theatre. Their work is informed by their trained disciplines of music, performance art and long-form improvisation. They consider performing the ‘sh!t’ to be theatrically political and they f**king love Dolly Parton.