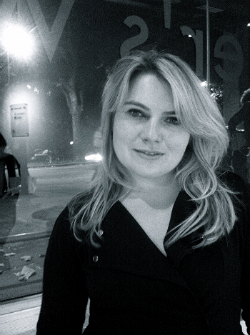 Great plays – in whatever shape or form you find them.

I think the most important thing is that we stop viewing going to the theatre as we would a plate of spinach – something to be suffered through because it’s meant to be good for us. Plays are not spinach.

Adapting Leo Tolstoy’s novella The Kreutzer Sonata for The Gate and writing a play set entirely in the dark for The Bush.

There are three that have stayed with me.

The first was John Crowley’s production of The Crucible at the Abbey Theatre. I was 14 and it shook me to the core.

The Second was Romeo Castalucci’s Genesi at the Dublin Theatre festival In 2000 – he had live dogs prowling, around the stage a contortionist in a glass tank, a woman with a mastectomy playing Eve in the garden of Eden and the stage was breathing. It was 3 hours long but it felt like 10 minutes.

The third was a production of Sarah Kane’s Crave directed by Wayne Jordan at the Samuel Becket Centre in Dublin 2002. I can still see the blinding fluorescent light-bulbs in my mind’s eye.

Nancy Harris was born and raised in Dublin.  Theatre credits include The Kreutzer Sonata, The Gate Theatre, Little Dolls The Bush Theatre Broken Space Season, Love In A Glass Jar, The Abbey Theatre 20:Love Season. She has been a writer on attachment at the Soho Theatre and the National Theatre Studio and has had work produced by Mind The Gap Theatre company in New York. For radio, Nancy wrote the five-part BBC Woman’s Hour Drama series Blood in the Bridal Shop with Louise Ramsden and her radio adaptation of Love In a Glass Jar aired on BBC Radio 4 earlier this year.