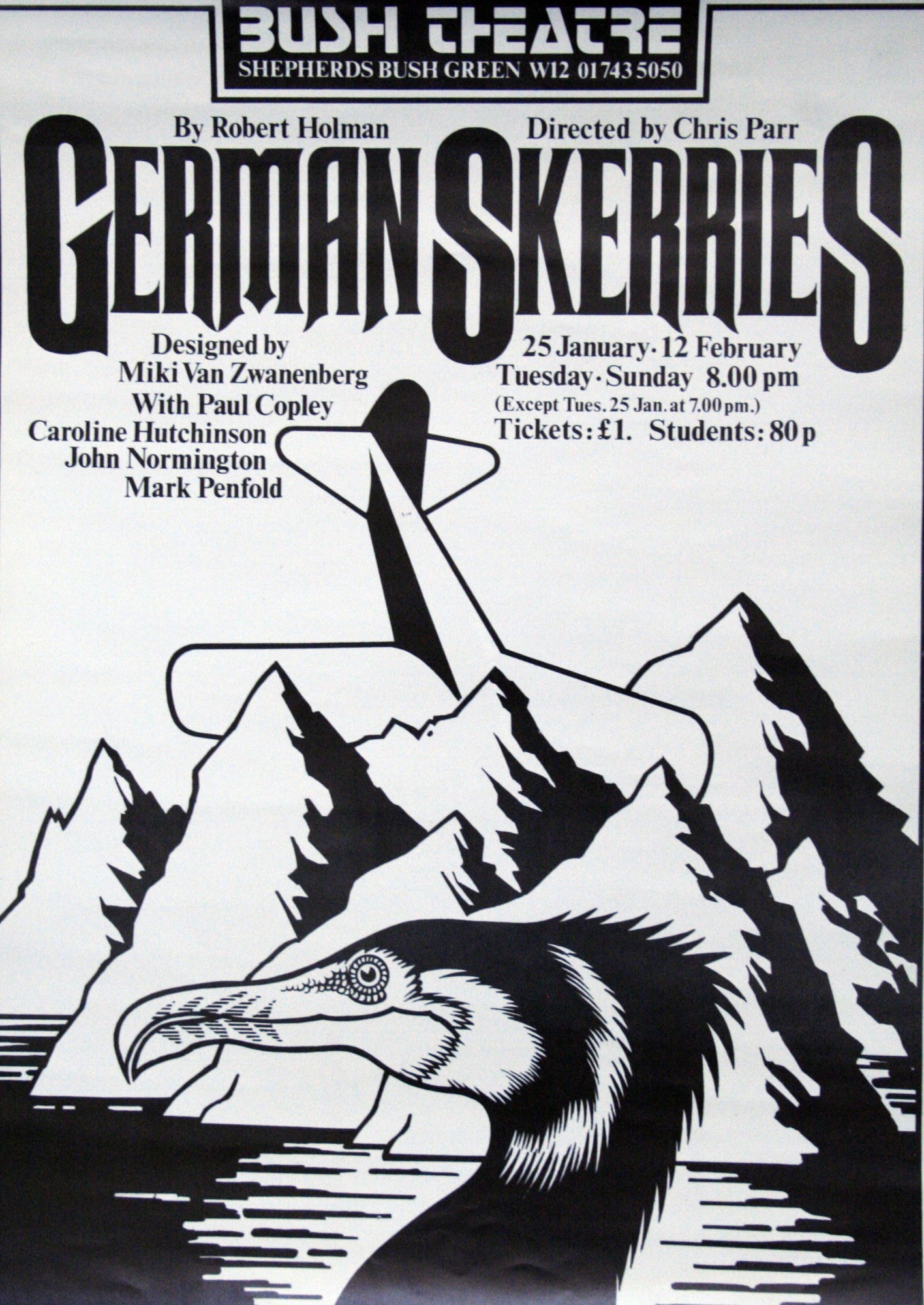 From the archive: Robert Holman on German Skerries

In honour of Up In Arms’ revival of German Skerries at Orange Tree Theatre, here’s a piece playwright Robert Holman wrote for our 40th anniversary book Close-Up Magic about the premiere of his play here at the Bush on 25 January 1977.

Memory can be a tricky thing. As I look at the words in my play German Skerries, dust blown off the text, I know they are the same as they were more than 30 years ago. But my memory of the production may not be as accurate as this. Plays are not tricky things. History has something solid to judge them from.

Trying to write for the theatre in 1977 must have been as easy or hard as it was thousands of years ago, or is today. I was 24 years old when I wrote German Skerries and naive about most things, including how to write. Luckily for me there was no one there to teach me, to show me right from wrong – as if there is right and wrong in the quietness needed to write a play – so I learned for myself. Writing was something I was trying to do every morning and the dialogue coming out of me was not always rational; I was arriving at an understanding of that and to know it was something I could not change. In one performance of German Skerries, the man sitting next to me fell asleep. He wasn’t enjoying a night out and he taught me a lot.

The play was directed by Chris Parr. He’d already directed three of my plays – he went on to do another eight – and I adored him, even on the days when he was critical of my terrible spelling, or my shyness when I couldn’t explain what a line was about. We’ll have to decide for ourselves then, he would say. And I would say, yes. The great thing about Chris is that he put the plays on as I’d written them, warts and all, because it’s often the warts that are most interesting, and he found things in them that I didn’t know were there. I had thought I was stupid. It was Chris Parr who showed me I had a kind of intelligence, and it was a big shock.

I grew up at the Bush.

German Skerries, like most of my plays, is set in a place close to where I was brought up in North Yorkshire. It needed a hut on stage for the characters, who are members of a Teesside bird-watching club, to go in and out of and use. And because it is set outside, the room above a pub also needed to have a mixture of couch grass and weeds growing on the floor. My memory is that German Skerries was the first play at the Bush to use a designer when Dusty Hughes was running the place, and that we stood in the theatre wondering how the pub would react if we watered the real grass and it seeped through the ceiling into the bar below. I don’t remember this being much of a problem – everything is solvable when you have almost no budget – even if it meant not telling the pub until it was too late. I think in the end rolls of plastic were begged from somewhere and an ultra-violet light found to keep the grass green.

The problem of the hut was more difficult to solve, and involved a saw. As the seating was in the theatre, a hut would mean some of the audience would not be able to see the actors. A saw was found somewhere. There was a degree of trepidation since not one of us was good at woodwork and what we were about to do seemed reasonably permanent. A part of the seating was cut from one side of the the theatre and man-handled to the other side near the door where the audience came in. It created an L-shape. The hut would now go in the far corner and everyone was able to see the actors. As it happened, though I don’t think we were aware of it then, it turned out to be a successful shape for more than just a hut, and the theatre stayed like this for years. 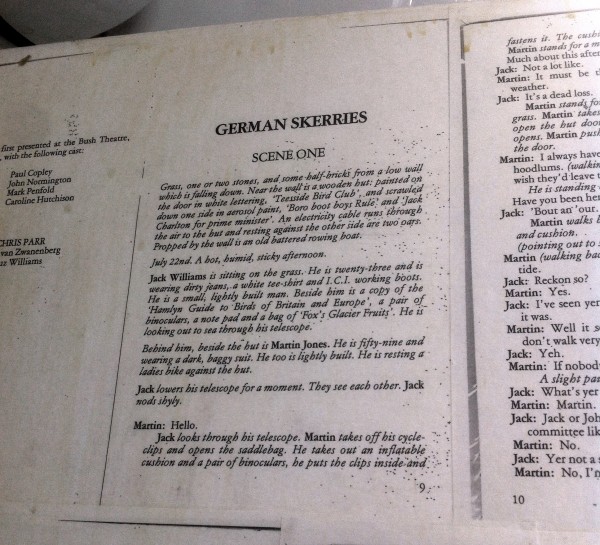 Patrons of our loos might recognise German Skerries as it proudly lines the walls!

There are other memories: of driving around West London in the middle of the night with the designer, Miki van Zwanenberg, looking in the skips for things we might use on the set; of the tramp who came up the back stairs one evening and stared at the actors, John Normington and Paul Copley, before doing a jog for the audience; of the prop I made that was reviewed by Michael Billington; but it is only now that these memories are becoming important to me. At the time it was too normal and too ordinary – and too exciting to properly take in.

Don’t miss the first major revival of German Skerries at the Orange Tree Theatre, a co-production with Up in Arms (Visitors). For more info and to book tickets click here