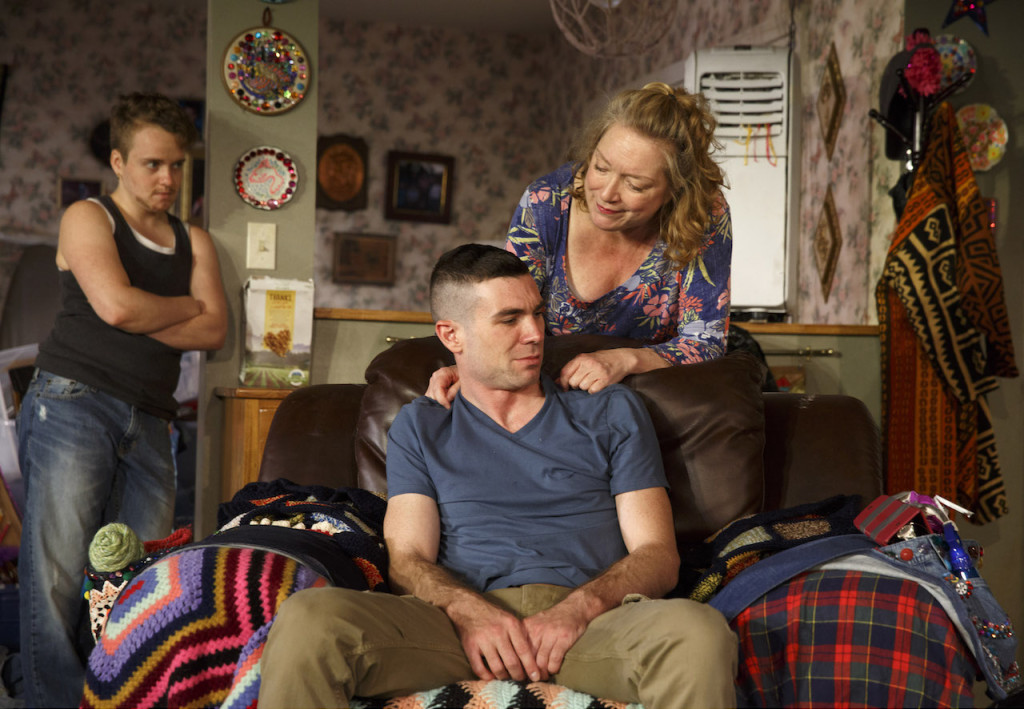 Taylor Mac’s expansive theatrical event Hir comes to the Bush in June 2017. Here’s how the play was received in New York at Playwrights Horizons.

Paige (Kristine Nielsen) and her youngest child, Max (Tom Phelan), have made a deliberate mess of their home. The cupboards are bare, the dishes unwashed; clothes are scattered unfolded on the floor, and the walls are crowded with sparkly crafts. Husband and father Arnold (Daniel Oreskes) putters feebly in the corner, a stroke victim costumed in a purple housecoat, garish makeup and a clown’s rainbow wig. Freed from his abuse and dominance, Paige and Max are diving into a new world disorder: postpatriarchal, postgender and postconsumerist, posthaste. Out of the chaos, they are convinced, a better way of living can evolve.

I’m here to tell you that unless you’ve seen “Hir,” the sensational — in all senses of the word — play by Taylor Mac, you cannot consider yourself an authority on this ever-enduring genre of American theater. Mr. Mac’s audacious and uproarious black comedy, which opened on Sunday at Playwrights Horizons in a crackling production, makes even the more extreme angst-amidst-the-chintz plays seem like demure drawing-room comedies of the 1950s.

… What is remarkable about “Hir” is not its woolly, dark vision of an American family run amok, but the flawed and real humanity that simmers beneath all the surreal comedy.

In recent years, a number of young playwrights—Branden Jacobs-Jenkins and Young Jean Lee come to mind—have taken their critical shears to the white-male-dominated family living room that was so prevalent onstage and onscreen when they were growing up. By chopping apart that convention, Mac, like Lee and Jacobs-Jenkins, isn’t so much remaking the world in his own image as he is addressing subjects that remain, remarkably, underplayed on the American stage: what bodies mean and what stories women are allowed to tell or perform. “Hir” has a lot of ideas—necessary ideas, especially when it comes to flinging open closets in the “trans” world—which spill over the edges of the play, but I wouldn’t take much out in order to make the show dramaturgically tighter or easier to absorb. The rudeness of its form is part of its power: you can’t build a clearer future without making a mess of the past.

Perhaps no play this year inspired a greater sense of awe than Taylor Mac’s audacious dive into the dysfunctional-family playpen of American theater.

“The thing about this play is it’s so funny, so engaging, so educational”.