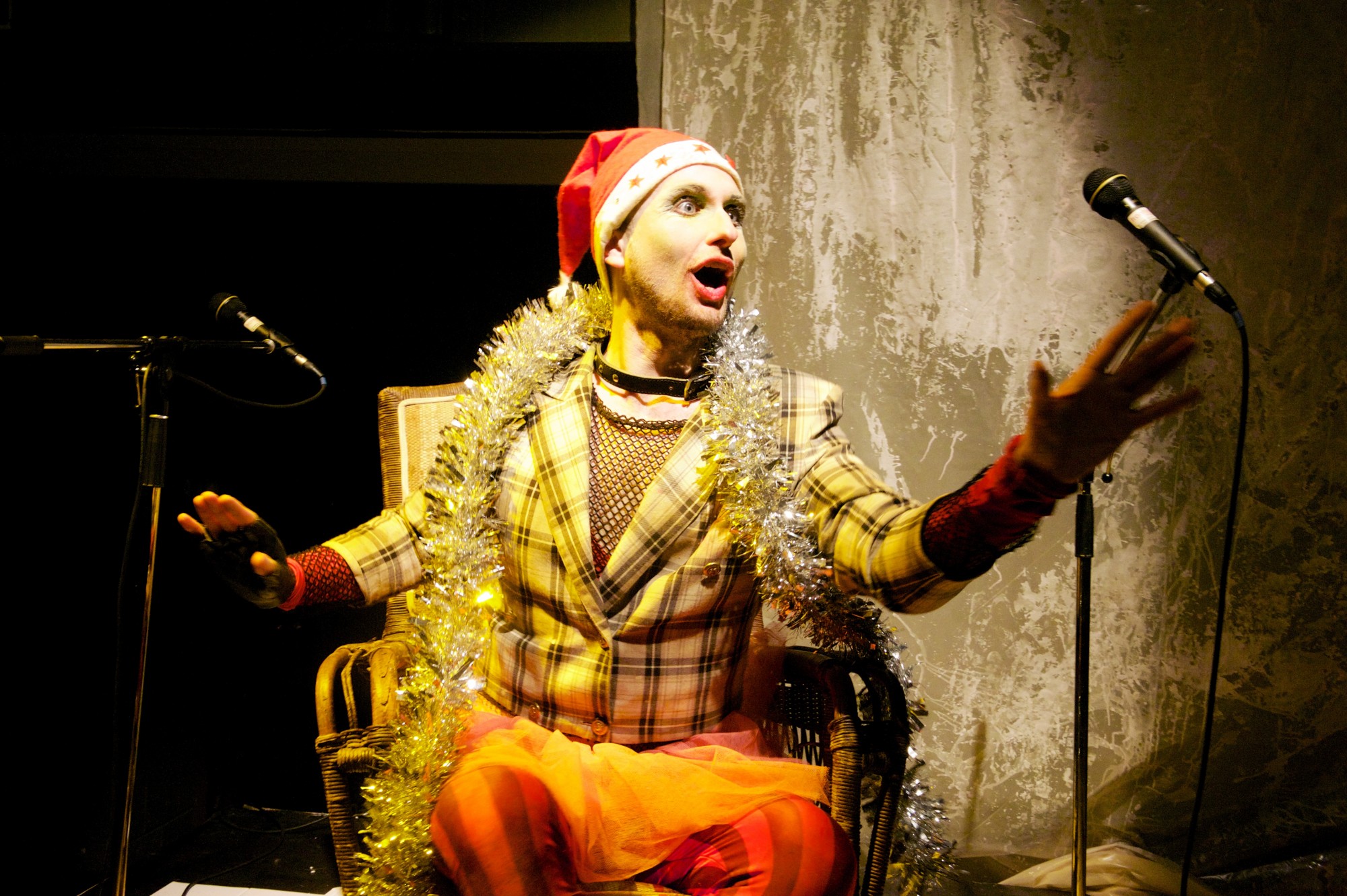 Seiriol Davies plays Swill in Islands, here he tells us about the play, his character, and what rule he’d implement if he ran an island of his own.

Can you tell us in your own words what Islands is about in one sentence?
It’s an angry, disgusting pit of charming nightmares; a scum-speckled mystery play about the ones who run our world. With fart gags (I claim a second sentence because I re-adapted your restrictive “rules” to be more responsive to my real-world corporate needs, no offence).

What was the making process like?
We played games and developed grotesque personalities and the sense of a gang: this style of theatre involves being totally uncompromising and shameless together. We’d improvise and write sections, and John and I would write songs, and then Caroline would bring it all together. We’d have periods of work with gaps in-between and then new drafts of the script every time. And we practised running around on wicked heels.

What have been the major things you’ve discovered?
Just how deep the rot goes. Just how much work there is to be done to get us back from the brink. That high heels with supergrip soles are amazing to run in.

Any favourite moments from the rehearsal room or on preview tour?
We first found the “DJ Swill Radio” sections my character does by putting on massive shades, a pink wig and a military hat and sitting in a huge rocking chair lip synching to economists like they were pop stars. There was another bit early on as well where there was an introductory speech that Caroline did, where she kept saying “but first”, and each time she did, we would all present our bottoms to the audience and advance towards them saying “butt first” for a few minutes. I mean it’s criminal that that sort of high-level satire hasn’t made its way onto the London stage tbh.

And can you tell us a bit about the character you play?
Swill is a heinous, fabulous god. I reckon definitely the “(w)holy (inappropriate) ghost” in the holy (moly) Trinity of gods in our story. When the gods take over Adam and Eve’s garden, and turn it into their own personal paradise, Swill becomes their mouthpiece, broadcasting their message of hope. He’s Mean Girls meets Joseph Goebbels meets Dance Dance Revolution.

“Swill is a heinous, fabulous god.”

What do you hope your audiences take away from the play?
Anger. Although, the World Economic Forum has just finished in Davos, so this may all have been sorted out by now, I haven’t checked. In the event that it hasn’t:  yes,  anger. Once that’s in place, we can talk about how it can be used.

Tax avoiders make their own rules and the consequences are often devastating. Let’s even it up. What rules would you have on your island?
No umbrellas. I bloody hate them. The bloody people who walk around heads down with their stupid big golfing umbrellas filling the pavement with eye-level spikes. How dare you! Your dumb hairstyle is not worth my sight! Except those see-through Blade Runner ones you can pull down over you and still see. Those are off the hook; I got my mum a Cath Kidston one a couple of years ago for Christmas, and she’s *very* happy with it so there.

Islands runs here at the Bush Theatre until 21 Feb.