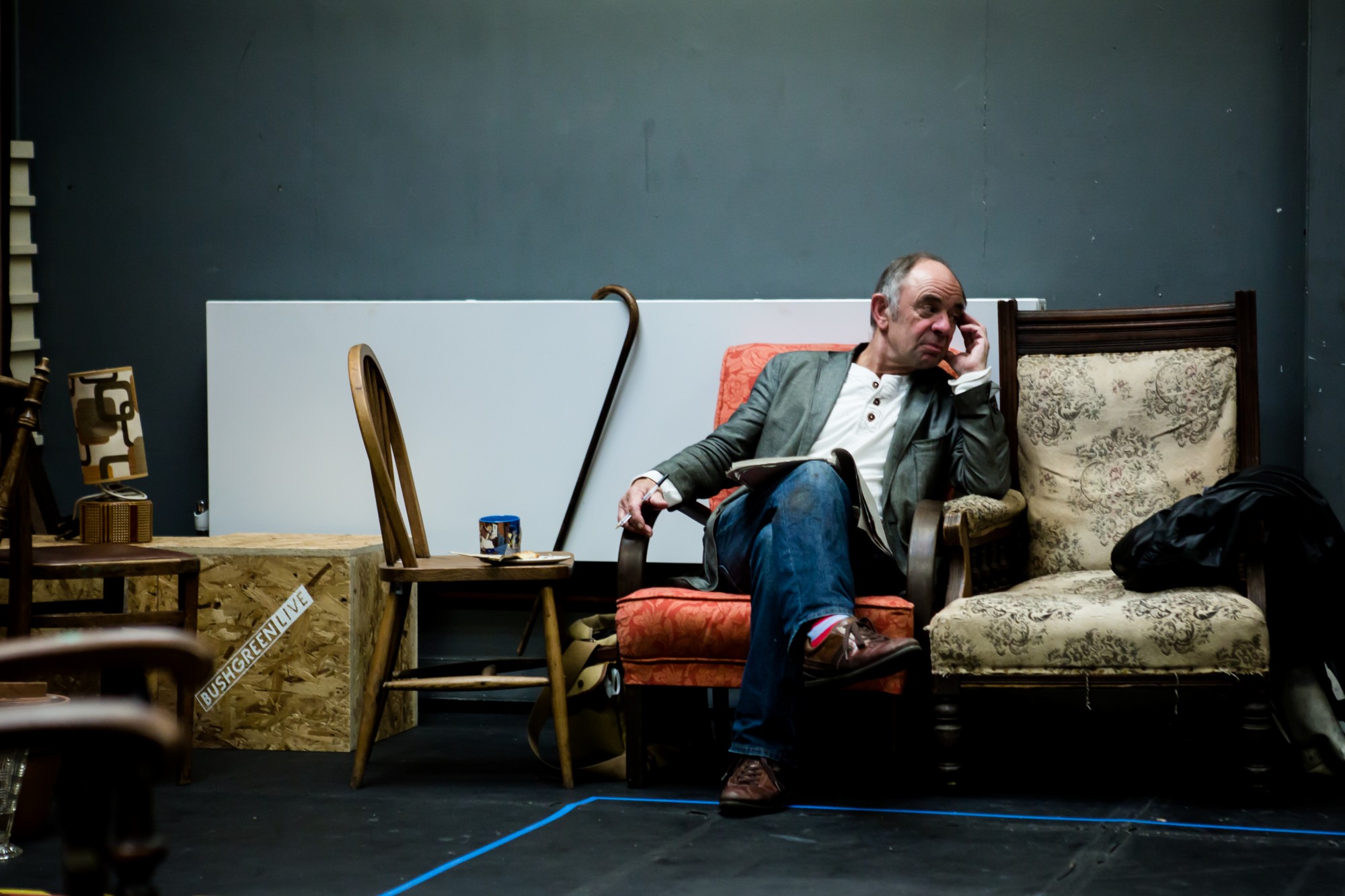 Perseverance Drive is a family drama set within a really particular context of the Pentecostal Church, what drew you to the subject?

About five years ago, when I was researching another play in Mississippi, I went to a church service on a Sunday morning in Jackson. There was a lot to eat and there was fantastic singing and a huge choir and amazing sermons, both from this bishop and visiting bishops. But something struck me. All of them seemed to say to me, Put up and shut up. I know this life is shitty. I know it’s full of woe and sorrow and things go horrendously wrong but just put up with it and you will get your reward in heaven. Don’t rock the boat, don’t question the establishment, don’t try and think there is anything wrong at all with President Bush, or big business or the arms manufacturers – it’s something you’ve got to put up with. It’s God given.

I’d already seen fantastic examples of racism within the communities when I’d been looking round Mississippi; there is still an enormous amount of division between the white population and the African-American population. I was thinking, Surely the black church should be a firebrand of political vibrancy to push these peoples’ cause forward? I was rather appalled by this [lack] but, on the other hand, I was swept away by the fantastic well of enthusiasm, faith and inspiration that the congregation got from the service. So there was this extraordinary contradiction: There was something which at one time was holding them back but at the same time was uplifting them.

A few years later, I was doing a play called One Turbulent Ambassador with LAMDA. We did a performance and this black guy called Tim said, ‘Can I just say, I enjoyed that very much. What else are you thinking of writing about?’ And I said, ‘Somewhere, at the back of my mind is writing something about the black church.’ He said, ‘Oh, my dad’s been ultra-religious all his life, my eldest brother’s a bishop, my youngest is a minister and our whole family’s been split asunder by religion.’ And I said, ‘Can I take you out to supper and love you forever and talk to you for one hundred years?’ And he said, ‘Yeah, okay.’ [Laughs] So, we did. He told me about his family and we formed a very good friendship. In my work I’m always looking for the microcosm that encapsulates what I think are the important issues in the world, in a situation which is theatrical and dramatic. Suddenly all these ideas I’d formed in my mind in Mississippi were encapsulated in a family situation and that seemed to be to be the way forward.

You have articulated your writing as being a reaction against both the Iraq war and the failings of capitalism, your work is political in that regard, would you say?

If you look at every thinking playwright, every thinking writer, many artists, photographers, sculptors, whatever, the Iraq war was a watershed in our thinking. Because we all thought, How is it possible that two and a quarter million people forsake their farmhouses, their cottages, flats, apartments, whatever, and walk through the streets of London, and nobody pays any notice whatsoever? There’s a government department paid for with taxpayers’ money, studying WMD in Iraq, with access to Lloyd’s lists, with access to people’s bank accounts, with access to arms movements and when they report that there is no chance of there being WMD in Iraq, how come a week later they say, Oh, the east of London can be bombed in 45 minutes and we have to go to war? It was politically the most disastrous thing that anyone’s done probably in the last one hundred years. I mean, it was putting the firebrand in the hornet’s nest in the most extraordinarily crass and blind way; an act of extraordinary folly. And you have to realise, this was done by big business. The American economy was in a certain amount of trouble. Arms manufacturers needed an outlet for their vast weaponry. The American economy needed to destroy Iraq in order to pay itself to rebuild it. And we all said we don’t want it. And that was the big question I asked Madani when we first started talking about this project: Is it possible for anyone to make a difference in modern society? Can the Bush Theatre make a difference? Then it struck me, one of the things about the opposition is that it is hopelessly split and can never agree amongst itself how its case should be put. So one of the big things about this play is: Here is a family who are well-intentioned, faithful and have high ideals, are very intelligent, but are in hopeless disagreement about how things should be done. They fall apart and crumble, not through the fact that they’re malevolent, or evil, or bad in any way but because they are flawed in putting their voice forward and cannot agree. But of course we always, always, always go back to the Iraq war. Because when Tony Blair says the twin towers or the London bombings or the Nairobi shopping mall shootings have nothing to with Iraq, that is the greatest lie that any politician has ever said in history. It is a direct consequence of what happened in Iraq. Iraq itself was people behaving over and above the will of the people, and that’s what the frustration is.

What is it about religion and an ever changing contemporary society that needs to be addressed today?

I personally think that religion should be one of the spearheads of opposition against injustice, poverty, spiritual deprivation – a sustainer of values. But, the very fact of religion organising itself so often emasculates the thrust of that religious movement. The constant squabbling over interpretation, the elevation of self above the ideals of that religion seems to self-destruct any power that it might have. And that’s inbuilt into my play. My play is about a family. All the great dramatic issues that have been built into drama over the centuries: pride, ambition, weakness, vacillation, envy, jealousy – all of these things which you think religion should damp down, very often are exacerbated by the organisation of religion and people taking positions and interpretive measure within religion. This family is no different. There’s a sort of stubbornness about ‘my way of interpreting this is the right one’ that causes division rather than unity. It does frustrate me a lot of the time that when I think the church should be vocal and coherent and actually preach the messages from one of the great religions, that it is so ineffective because so many other things get in the way: personal vendetta, pride, jealousy, all these terrible  human qualities that pervade everything. The fact that people are ranked in the church according to their social status: how can that possibly be anything to do with Christianity whatsoever? All these ludicrous things, these rules, people try dressing up in strange clothes and putting on a funny voice: what’s that got to do with anything? It’s absurd.

At the centre of this drama is a family, albeit a dysfunctional one, are they representative? Do they each represent something different?
No. They’re too messy for that. The big journey for me in writing this play, having met Tim, and some other members of his family and having talked to them, was then to remove it from that family and turn it into drama. One of the things that Rob [Rob Drummer, Associate Dramaturg], Madani [Madani Younis, Director] and Omar [Omar Elerian, Associate Director] have been so helpful with is getting me away from thinking that I have to be faithful in some way to the family I based this play on and getting me into the realm of drama. The passage of writing has been to forget the real names of the people and to go into the fictional names, to write the sort of complex, contradictory characters that you’d find in any drama; especially because, as a playwright, I have formed my reputation on verbatim plays where I have a fantastic duty of care to be as faithful to the characters I’ve interviewed as possible. I don’t have to do that in this play. I can make these characters as contradictory, as unpredictable, as idiosyncratic as we all are. Because that’s what people are like. People can be at one time extraordinarily generous and very mean; broad-spirited and mealy-minded – all in a moment. So, the characters aren’t there to represent, they’re there to be as real as they possibly can be. But between them, by putting them together, and seeing what happens when the car crashes happen – that’s what interests me. One of the perpetual themes in drama happens when two people have a very strong point, when neither of them are what you might call wrong. I think in this play there are a lot of people who are sincere and in many ways who are right, it just happens that the rightness clashes with somebody else’s rightness and you get a bit of a debacle. But that’s drama; that’s the point of drama. They’re not delineated in such a way as to represent a point of view, that’s too clinical. They’re messier than that. But within that mess they do quite often crash around and make a bigger mess.Beca