It seems that, already, 2017 is another year of the Big, the Loud and the Terrible.

After 2016’s impressive haul of the celebrity dead, and its headline busting ascendancy of Brexit and Trump, surely the world was entitled to a breather from the relentless cacophony of Breaking News, but alas, it wasn’t to be. Theatre will naturally be turning its attention to the new world we’ve woken up in, and take on the huge ideas and grand themes that are daily dredged up. I hope, though, that it won’t neglect or allowing the drowning out of the quieter, but equally terrible and tragic stories and realities, that don’t make the headlines. 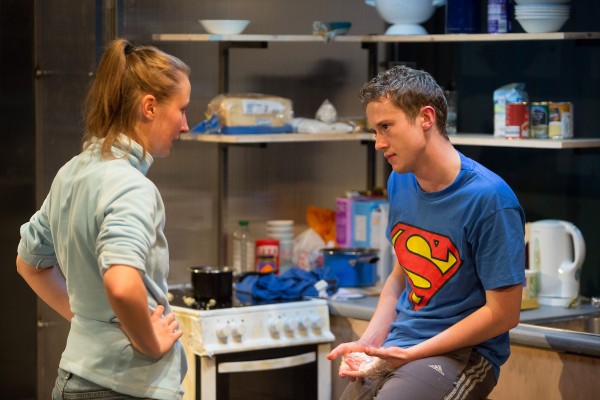 There are two linked images which underpin Katherine Soper’s Wish List, currently playing with our friends at the Royal Court in the Jerwood Upstairs. The first, the image of tragic Dean, a young man crippled by obsessive compulsive disorder, arranging and re-arranging his hair in the bathroom mirror. The second, that of his sister Tamsin, toiling in the bowels of an apparently dystopian but in fact all too real mail-order warehouse, her every pee break snatched from the relentless rhythms of packing, cardboard cuts and barcode scanning. Both find their health and dignity under threat; both are having the joy and promise ripped from their lives by toil and repetition. Tamsin’s life is seen broken up and broken down by the hours of labour over the Amazon conveyor belt, deftly directed by Matthew Xia as a constant tussle of adhesive strips, folded card and bubble wrap.

Soper’s play asks some difficult questions about labour, austerity and mental health in this strange and fractious time in UK history.

I’d argue that all three of these plays ask those difficult questions with precision regarding the cause of these issues. That a play like Soper’s Wish List tackles its issues with an exactitude that makes it clear that the pressures which face the country’s poorest are not the vagueness of ‘austerity’, but the specifics of inhumane work schedules and of a blend of mechanisation and manual labour which treats the worker only as a particularly pliable and malleable link in a chain of production. If you overclock a machine, it will eventually break down and cost you money. When a person breaks down, there’ll be a queue of the unemployed and underemployed ready to take their place. 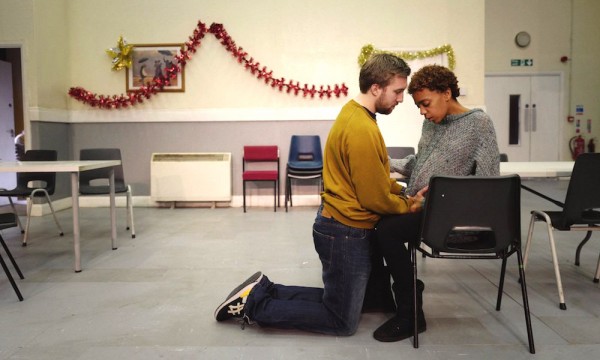 Soper’s play arrived in London immediately following Alexander Zeldin’s Love, his second fully-formed piece of what might be termed simultaneous or actual realism, a developing methodology for the presentation of lives and characters onstage which pulls away from some of the conventions of playwriting and dramatic construction. Zeldin’s work still contains a number of these, in its scene changes, blackouts, and even eventually music, but it is in the breaking away from them that it’s most remarkable. It’s willing to have conversations carry on out of view and, almost inaudibly, to disengage from the crying war of theatre and find painful truths in vast hanging silences. There it finds its heartbreaking power.

We’re thinking a lot about vanishing lives and vanishing people at the moment here at the Bush. In particular, Barney Norris’s new play While We’re Here opens our brand new Studio space at the end of April. You’ll meet two people there who, if not invisible yet, are certainly fading; are certainly slipping out of society’s view, for one reason or the other.

One of theatre’s best and most vital duties is to direct attention, and with it understanding, onto the unwitnessed lives of the world. To do this successfully, it must look beyond the platitudes of politics and the half-stories of statistics. It must approach the subject in detail, with precision, patience and compassion.

Bruntwood Prize for Playwriting is now open for applications.