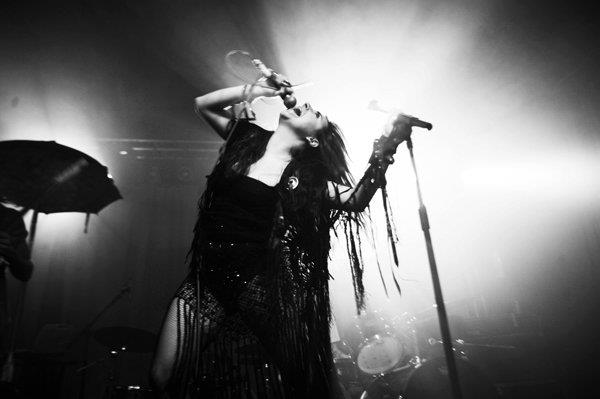 Brigitte Aphrodite, writer and performer of My Beautiful Black Dog, talks about the inspiration behind the show and asks why can’t you mention melancholy at a dinner party without killing the mood.
Can you tell us about your show in one sentence?

A poetically wild musical about depression, but it’s not depressing – it’s hopeful (I hope…)

What questions lie at the heart of the show; what are you asking the audience?

Why can’t we talk about our feelings? Why is mental health still taboo? Why can’t you mention melancholy at a dinner party without killing the mood? Why does it feel shameful? Why does it feel like a doom disease that not many people suffer from when nearly a fifth of adults in the UK experience anxiety or depression ?

I love the Greek dip, taramasalata – I love the colour (neon feminist baby pink). I love the flavour. I love how it slides down my throat with a glass of crisp dry white wine!
I used to be a sponsored inline aggressive rollerblader.
I snogged the milky bar kid (I FEEL THE NEED TO CLARIFY NOT WHEN HE WAS A KID AND I WAS AN ADULT- he was 15 and I was 15).

I woke up at 7am one Sunday morning with intense anxiety and an idea. I then tweeted Laura Keefe and asked her if I could come over (I hadn’t seen Laura in about a year). She replied instantly with a yes! I arrived at Laura’s house in my pjs; she was in her pjs too! I said “you wanna make a musical?” She said “yeah lets make a musical! What will it be about?” I said “Well, recently I wasn’t able to get out of bed for 3 weeks so I think I need to share this experience through the medium of musical theatre and make an album to go with it” and so it began…
At that point I had a couple of songs (which I sang acapella to Laura that morning), then Iron Shoes began working with us which was so exciting because they were a theatre company I had always looked up to. The piece evolved over 2 years – more songs were crafted and the more I learnt about my depression (my own and other peoples individual experiences), the more the show developed.

I remember watching two incredibly fresh and exciting shows at RADAR last year – Where the White Stops by Antler Theatre, a very cool, magical and sonically beautiful adventure story and Mess by Caroline Horton which was about anorexia but it was colourful and funny as well as being moving and thought provoking. I remember walking away from RADAR 2013 thinking how important a festival like RADAR was in a time when a lot of the commercial art we are force fed tastes bland as bland like fast food, whilst also day dreaming that my musical would be on in RADAR 2014… in the words of Gabrielle in her 1993 hit DREAMS CAN COME TRUE!

The singing detective use of music to convey the protagonists physical and psychological anguish and pain:

This song is about a panic attack the singer had whilst gardening. Its funny cool but you also feel her anxiety I LOVE THIS ARTIST –

The album release next year (I’m half way through recording the album at the moment with an incredibly talented producer Nick Trepka) and a tour of My Beautiful Black Dog. I’d love it to tour like a band would, to gig venues, universities and music festivals as well as theatres up and down the country and beyond.
After that I’d like to make a Christmas show, a children’s show, a fashion show…

Part Time Punks by Television Personalties – people moan about ‘the Hip-ster’ but really they are moaning about un-authenticity, this song talks about that..Our Most Brilliant Friends by Slow Club – one of my favourite songs. When we are drowning in life, fudge it! Lets dance through it.

History Eraser and Avant Gardener by Courtney Barnet – her lyrics are brilliant!

I Wanna Be Yours by John Cooper-Clarke – best love poem/song ever writ-ten!

Moving to LA by Art Brute – he’s got a point!

Batches and Cookies by Lizzo – tunnnneeeee challenges hip hop culture and gender stereotyping and makes you grind your body.

Among Angels by Kate Bush – I went to see her live and this song is kind, encouraging and beautiful.

Purple Hands by Kwes – this is a master piece from another galaxy!

Surf’s Up by Beach Boys – weird and wondrous!

My Beautiful Black Dog is on at RADAR from 10 -12 November.