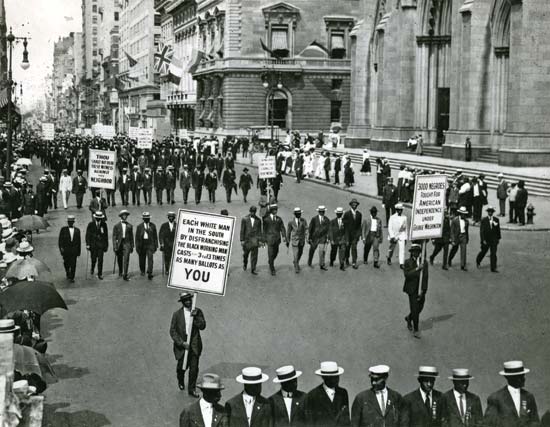 The Royale | Black Americans in the early 20th century

Early 20th century America was a dangerous place to be black.

The legacy of slavery, the Civil War and Reconstruction had left the old social order in tatters. Ideas about white superiority, once thought of as natural and right, were being challenged. And those people whose way of life was being challenged didn’t always like it.

The Ku Klux Klan boasted one million members and was headquartered in the North. Lynching was rampant. Black people stepping outside of the boundaries of ‘acceptable’ behaviour routinely found themselves facing lynch mobs. The NAACP (National Association for the Advancement of Colored People), founded in 1909, estimated that there were 3,500 lynchings between 1889-1922.

Black Americans resisted racism and fought for change, individually and collectively, in many forms, but there was disagreement about which form, pace and style would have the most effective results.

In The Royale, Jay ‘The Sport’ Jackson’s attempt to win the heavyweight title is an example of change that can happen swiftly, instantaneously smashing the order of the world. But his sister Nina believes in a different pace of progress, she believes that change needs to be thought-out. She speaks to the fear that many black Americans had: that quick change is dangerous and that it could cause violent backlash.

NINA
In the middle of the title-fight heavyweight champion nonsense have you stopped to think, for one second –
That you gon’ up’n get somebody killed?
JAY
Of course I have –
NINA
I don’t think that’s true, Jay.
No, I think you up and forgot about the rest of us,
The ones ain’t as strong as you.

This brother and sister are on the same side. They don’t want to live in a world where told black children not to dream big. But they disagree about how to go about making change a reality. Do you move slowly and steadily, chipping away at barriers and prejudice? Do you move fast and decisively, whether the world is ready or not?