On February 25 1901, Jack Johnson fought Joe Choynski in Galveston. This was in the early days of Johnson’s career and Choynski, a popular and experienced heavyweight, knocked him out in the third round.

Because prizefighting was illegal in Texas at the time, they were both arrested. Bail was set at $5,000 which neither could afford. The sheriff permitted both fighters to go home at night so long as they agreed to spar in the jail cell. Large crowds gathered to watch the sessions. After 23 days in jail, their bail was reduced to an affordable level and a grand jury refused to indict either man. However, Johnson later stated that he learned his boxing skills during that jail time. The two would remain friends. 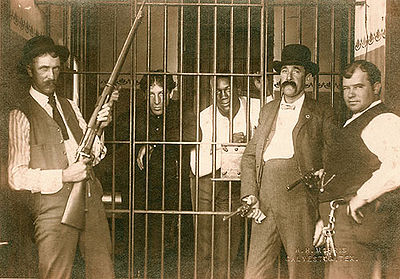 Johnson attests that his success in boxing came from the coaching he received from Choynski. The aging Choynski saw natural talent and determination in Johnson and taught him the nuances of defense, stating “A man who can move like you should never have to take a punch”.