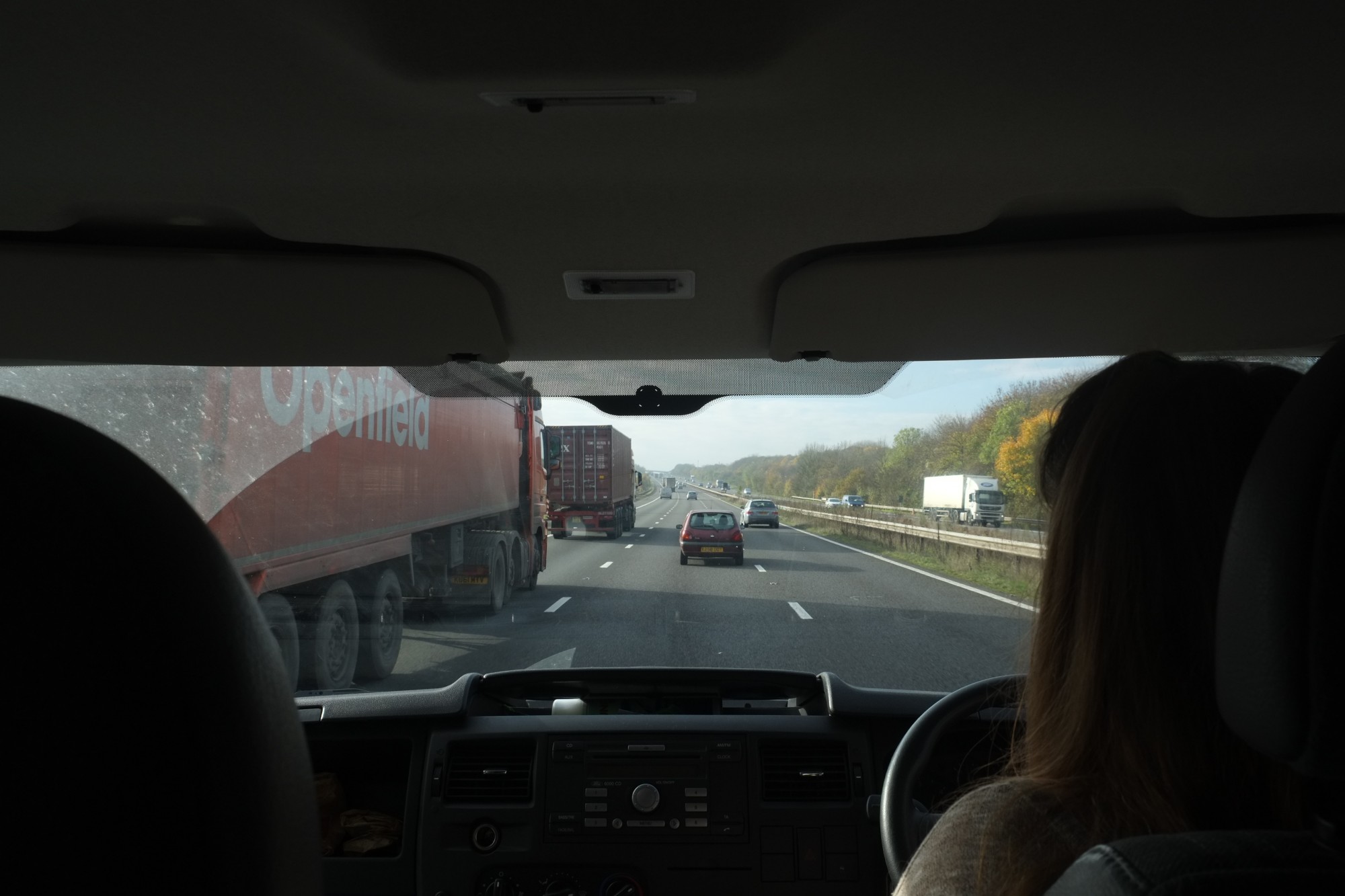 Visitors: what goes on tour… #1

Visitors by Barney Norris opens here at the Bush tomorrow! But before then, the wonderful cast & crew have been on a rural tour to the areas around which the play is set! What’s more Eleanor Wyld who plays Kate has been keeping a diary. Here are the first two days:

There was something wonderfully comforting setting off on what felt like a school bus to Wiltshire on our ‘Rural Tour’. The women sat up the front and made lewd gestures at the other white vans on the road who laughed at pointed at four young blonde women at the wheel of a huge white transit van. We upheld our feminist values by playing early Britney Spears tracks on tinny speakers (much to Simon Muller’s dismay) and piled out of the van at Fleet services raiding the WH Smiths for crisps and chocolate. This van was going to be fun. 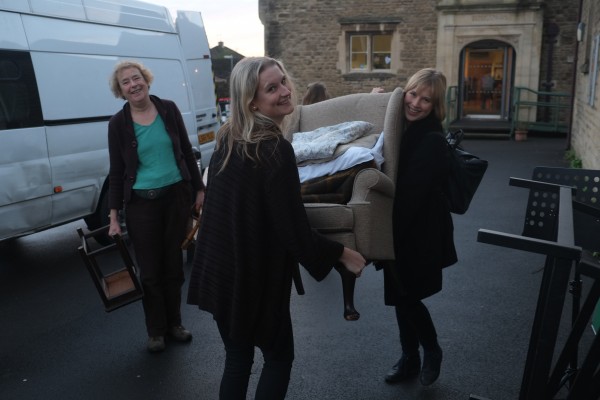 We arrived at the Oakhaven Hospice Trust three hours later where we met Linda and her gorgeous dog Dust for sandwiches and a run of the play. This run was somewhat different with Dust the dog becoming a feature of every scene, welcoming us on our exits and entrances, scene stealing whilst chewing his leg, generally being far more ‘in the moment’ than we were. 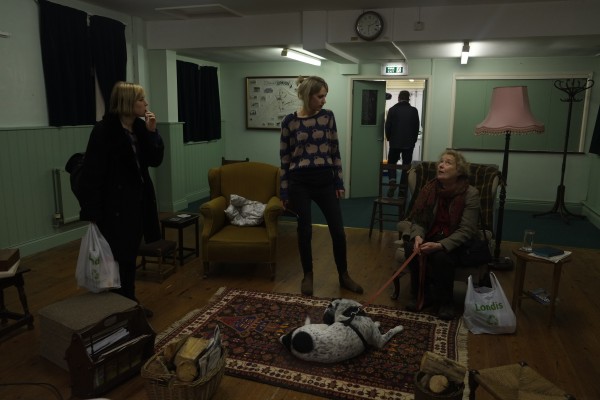 An early finish then and we headed back to where we would be staying for the next four days – two beautiful cottages in the idyllic setting of Britford. Boys in one cottage, girls in the other we set about cooking a huge communal dinner of Robin’s finest pasta sauce and salad. The red wine flowed, thespy stories were swapped and everyone lay on the rug with Dust. 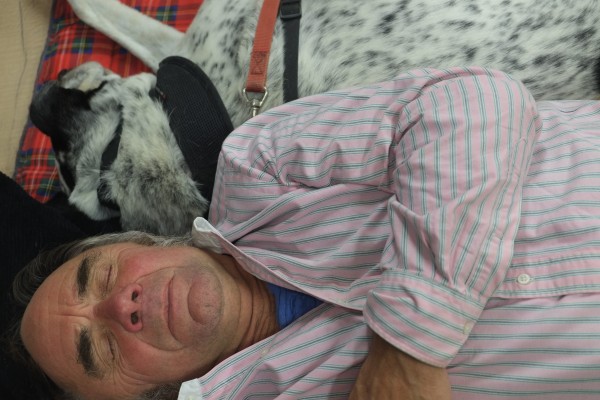 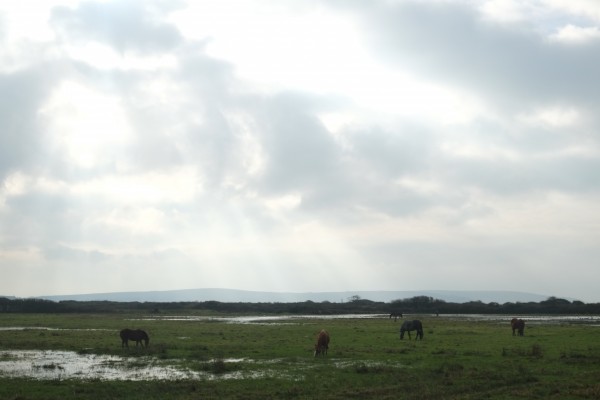 Up early on day two we got to Oakhaven and whilst Alice and the stage managers set up the stage, us actors got out of their hair and went for a walk across the stunning marshes. The light on the water was exquisite, we saw rare birds and felt the air in our lungs, ready for what was to be a more wonderful and emotional day than I had expected. The Oakhaven Hospice had sold tickets to its friends, supporters and relatives and proceeds went to the hospice. 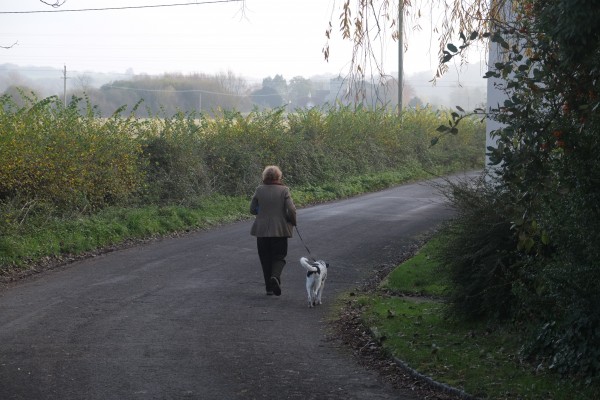 Our first day of shows of ‘Visitors 2.0′ was nerve wracking, especially in front of an audience who were dealing with the heartbreaking themes in the play first hand, but we needn’t have worried. The laughter and connection that the audience made with caring for their own dying relatives freed us as actors and both shows felt special and enlightening for everyone involved. We even forgot about Linda walking head-first into a glass door. After a beer we all loaded the van, waved goodbye to the wonderful Oakhaven and only had to deal with a broken headlight and an almost total closure of the A36 on our trip back before left-over pasta back at the ranch and an immediate collapse into bed.
Stay tuned for the next two days of Eleanor’s Diary! Visitors runs at the Bush from 26 November – 10 January 2015.