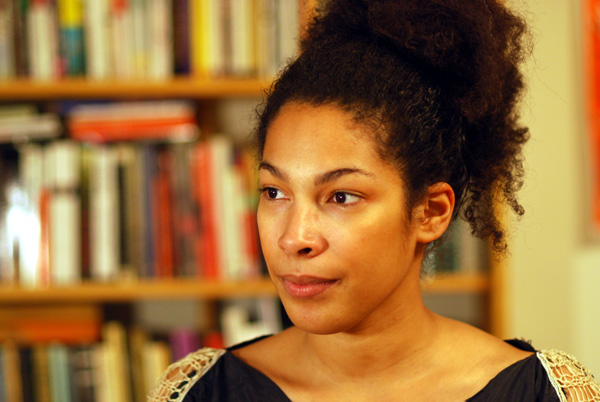 We Are Proud to Present: In Conversation with Jackie Sibblies Drury

Jackie Sibblies Drury, writer of We Are Proud to Present a Presentation About the Herero of Namibia, Formerly Known as Southwest Africa, From the German Sudwestafrika, Between the Years 1884 – 1915 joined us in London for the rehearsal period, previews and press night. Before she flew off to Morocco to start work on her new project we asked her three questions, here are her answers…

Jackie: Why the long title is a great question, and I have been asking it of myself a lot lately. The real answer as to why the title is so long is that I never thought anyone would produce the play so there was never any reason to make it shorter. But I also hoped the title of the play would be something that would be a bit dynamic; where before you see the play it’s just sort of a mass of words and pretty unintelligible but that afterwards you sort of learn a bit about the circumstances and it sort of becomes something that makes sense. Hopefully that process of learning is similar to the process that the actors go through in the play.

Jackie: I think that, or I hope that, the play is relevant to this specific setting, meaning London 2014, because I think that globally for a lot of reasons we think that we’re in a post-racial society. That racism is something that is in the past or in very specific areas but not in others. I don’t think that that’s true. I think that the way that we talk about race now and the way that we deal with racism is not talking about it or not dealing with it and I think that that can be really damaging. So, I hope British audiences have discussions that are really meaningful after having seen the play.

Jackie: I think that the Bush is the right theatre to be presenting the UK premiere because to me it seems that it’s a theatre that cares a lot about diversity and cares a lot about the different audiences and groups of people that come to see theatre in Britain. I think that the play is a play that’s meant for a big mix of people and is similar to the mix of people that you see on the tube. I hope that that is how diverse the audience is and I think that the Bush is the best theatre in London to get that kind of audience. It seems to me that the Bush does the kind of work that I care about, so I’m excited that my play is going to be here.