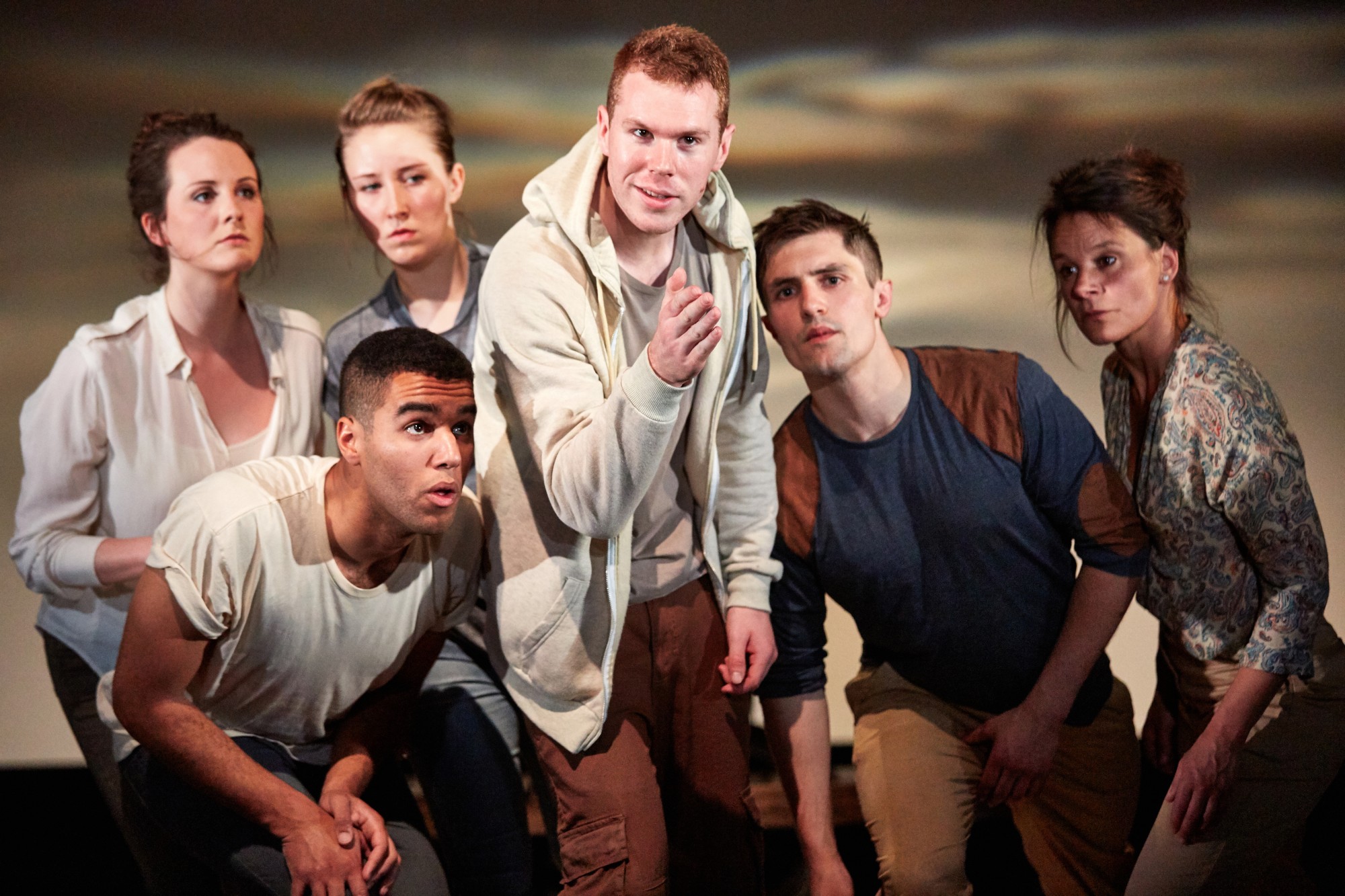 Pink Mist | The Music of Bristol

This article was originally written for the Bristol Old Vic blog and published on 30 June 2015 ahead of the play’s critically acclaimed premiere production.

The music in Pink Mist basically does two things. There’s music that’s to do with remembering the past; that is soft and ambient, related with sadness and loss and memory. In the stories we are being told, though some of the action happens in Afghanistan, a lot of it refers to where the young men have come from, what they’ve lost and their former lives. A lot of it is reflective and has an incredible sense of regret, and of course loss. 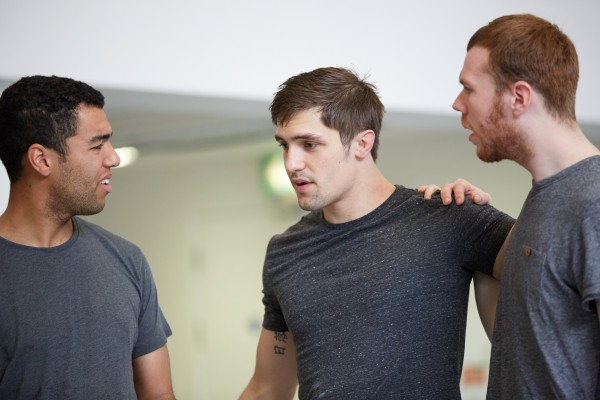 Then, there is music that is much more to do with a release of energy, of violence and of aggression. We have incredible movement sequences that George (Mann, Associate Director) has directed; the energy of those moments is dynamic and powerful. Those moments are more rhythmic and loud. Those are the two musical strands throughout the piece.

Owen Sheers (the playwright) is massively into dubstep – he references it a lot in the text, and I’ve had long conversations with him about it at various points. Of all the outside musical influences, that’s the one I’ve drawn upon the most. There’s a rhythmic energy to dubstep, an edge – particularly the dubstep that comes out of Bristol – that chimes really well with the stories. It’s a very definite influence.

I worked on the music and sound for the Radio 4 adaptation of Pink Mist. It’s very interesting coming back to it in a completely different medium. There’s an interesting difference in approach to Owen’s text in this rehearsal room. The main difference between the two is probably that the radio version felt a lot more interior. Owen’s realised the voices so perfectly that it feels as if these guys are talking to you very naturally. That naturalness is an illusion – actually the writing is incredibly skilful, it’s highly crafted poetry that is very clever and has lots of internal rhymes and rhythms, but when you hear it, it’s just like someone is talking directly to you. That intimate sense of someone telling you a story that feels like it’s been written just for you is fantastic for the radio, as you obviously have a very close relationship with the voice that comes across the airwaves to you. Generally, the radio version had a reflective feeling, you felt as if you were inside their heads. 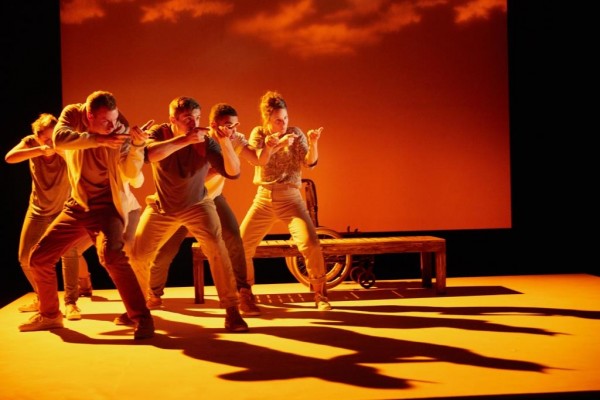 What’s fantastic this time around is that in presenting it on stage, there is the opportunity to have very striking, powerful and violent visual moments too. I’m using some of the previously generated radio material for the quieter, more reflective moments. The new stuff is much more to do with the energy and violence of the piece.

Bringing in these new elements has lent an excitement to this new stage of the journey. It was so thrilling on the first day of rehearsals working with George and the company, to be able to bring a physical language to the piece having just worked with the voices for so long, it was really exciting.

It’s been great knowing the text so well already, as we have such a short rehearsal time to turn it around. The actors knew the verse almost word perfectly from day one, but the fact that I knew it by heart as well was brilliant. I had a detailed overview of it in a structural way that has proved so helpful. We’ve been able to power through the text – starting from the beginning and working our way through, creating this incredible physical language that the sound has to work with very precisely, and very organically. 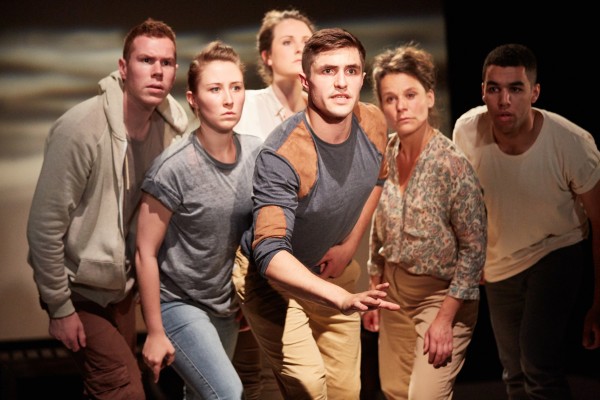 I always particularly love working with movement directors. Movement directors and musicians more or less speak a similar kind of language. It always feels like a very natural, immediate and easy way to establish a connection, and therefore a short-hand, a quick way of working. It’s very exciting. It’s so lovely having George and John (Retallack, Co-Director) working alongside each other – it’s great to have two directorial energies directing the piece. They make equally brilliant, but slightly different, suggestions for moments that I can build from.

One of the things that is really terrific about this show being made at Bristol Old Vic, is that it’s grounded in Bristol in a specific way. There are a lot of instantly recognisable geographical details (from Dundry Hill to the Thekla) – places people will immediately recognise – but also Bristol music is very central. Owen spent a lot of time listening to Pinch, Forsaken and Headhunter, as well as older stuff like Portishead and Massive Attack, which he’s woven into the text in interesting ways. One of the characters, Taff, who has PTSD, deals with that by going down to The Tunnels and dancing. Burying himself in the music, filling his head with sound so that he can shut out all the horrors in there. As Owen has such a particular sense of that sound, and as it’s such a particularly Bristol sound – I’m very keen to reflect this as much as possible throughout the show.

Dubstep is usually at a specific tempo. It’s not a massively fast music, but there’s something about it that seems to lend itself fantastically well to the physical language that we’re exploring. It has a very powerful pull, almost physical, once you hear it you can’t help but move. 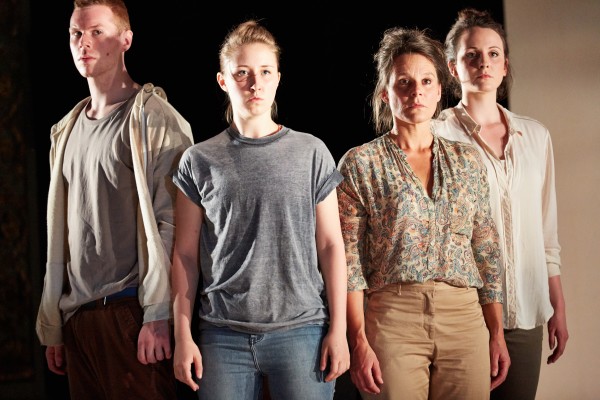 One of the many interesting things about Owen’s text is that it is full of realistic detail: lots of domestic detail – their jobs, their homes, life before they joined the army – and lots of geographic details. When you read the text, you think it’s very naturalistic, but actually these are stories that are being just told by voices. Through various twists, you realise it’s not actually very realistic at all. Is it a dream? Are these ghosts?

I’m interested in taking the naturalistic sounds of the domestic world, those sounds from childhood and sounds from nature, and slightly removing them from reality and abstracting them – making them slightly dreamlike. We might hear the sound of a peregrine around Clifton Suspension Bridge, but what we actually hear is an abstracted version of that, made electronically somehow… something made more textural and dreamlike. I’m pursuing that approach through the piece. Taking something that seems real but making it slightly unreal.

I’ve been on a Pink Mist tour of Bristol and its surroundings. I’ve driven out to the Suspension Bridge, up Dundry Hill, out to the Severn Bridge to see if there’s anything interesting and natural to those habitats that I can record out on the road. Arthur works at Portsbury Docks, so finding something there would be good.

The cast are fantastic and one of the things I have to be careful of is not to illustrate what they’re saying. You don’t need to do their job twice for them, you need to support and enhance – not double.

It’s been such a joy to be involved with this text for as long as I have been, in its various incarnations. It was thrilling on the first day of rehearsals here at Bristol Old Vic, watching the cast working with John and George. We seemed to generate a lot of material very quickly. By the end of the first day we had already set the first five minutes of the show, which is basically unheard of.

Pink Mist transfers here to the Bush after a highly acclaimed run at Bristol Old Vic Theatre last year. Find out more about the play here.