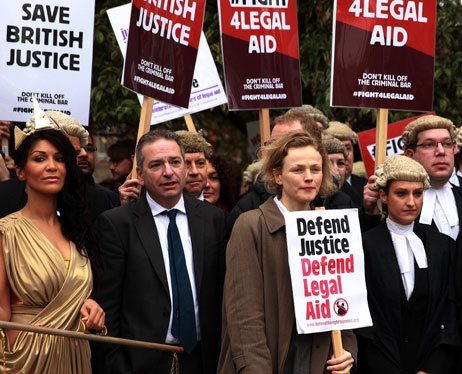 What is legal aid and why should I care?

You may have heard that last year the Bush creative team specially commissioned Rebecca Lenkiewicz to write a play about government cuts to legal aid.

This play is called The Invisible, it is currently in rehearsals and will run from 3 July – 15 August. But what is legal aid? What has been cut? And why do we, and many other people, think it is such an important issue?

What is legal aid?

Legal aid pays specialist lawyers for one-off advice or to bring or defend a case. It is for people who cannot afford to pay for the costs of their case themselves. The income threshold is very low, so it is the poorest, often the most vulnerable, who get legal aid.

Criminal legal aid is used to defend yourself when you are arrested or charged with a criminal offence. For most cases a fixed fee is paid, which covers all the work done in a case by the solicitor and the barrister, no matter how long it takes. Sometimes cases cost more to take on than the lawyers recover.

Civil legal aid is used when someone needs to bring or defend a case about their personal life or property. Examples include: employment law, housing cases, immigration matters, welfare and benefits advice law, education law including special educational needs issues, actions against the police and challenging unlawful decisions by a state authority. It can either be a small fixed fee for one-off advice, or a low hourly rate for the case, but only for some of the necessary work.

What are the changes?

There have been no increases in legal aid payments in over 15 years, instead there have been substantive cuts. It has been admitted that the cuts are based on no evidence but were made hard and fast because that is what the government wanted. The Public Accounts Committee recently reported that the Ministry of Justice does not know whether the savings in the civil legal aid budget represent value for money. Read more here.

If you are wrongly accused of a crime and have to pay for your defence and are found not guilty, you can only recover up to the very low legal aid rates. Most people will be thousands of pounds worse off.

The government has brought in substantial changes to judicial review. Judicial review is often the only way people can challenge wrong decision by public bodies such as their local authority, police or school. The changes mean it is now much more difficult to hold the state to account.

Why is that a problem and whom does it affect?

These changes affect everyone and devastate the justice system we are so proud of.

“Legal aid gives the voiceless a voice. These cuts will silence them.”

The government agrees “legal aid recipients are amongst the most disadvantaged in society, reflecting both the nature of the problems they face as well as the eligibility rules for legal aid.” You never know when you might need legal aid. Save legal aid before it’s too late.

This information is taken from the Justice Alliance’s ‘Be Afraid Without Legal Aid’ pamphlet. You can read the whole thing here.