In Conversation with Yomi Sode

Performer, host, facilitator, DJ, youth worker and mentor – these are just some of the titles Yomi Sode has held in his lifetime, and as a 2019 recipient of the Jerwood Compton Poetry Fellow, Yomi’s work as a poet takes him to new heights.

For one evening only, Yomi Sode trades in the stage for a seat as he joins Tobi Kyeremateng in an open, honest and lively conversation about his work and life.

This event has both seated and standing options. To ensure you get a seat please arrive early – doors open from 7pm.

This is a past event
‹ › ×
Host
Tobi Kyeremateng 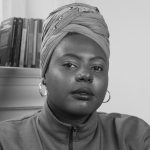 Tobi Kyeremateng is an award-winning Cultural Producer with 8 years’ experience in live performance, festivals, film and community engagement. She started her career in 2011 as a Young Associate Producer at Ovalhouse Theatre, assisting in producing The Street – a promenade performance in Camberwell. In 2013, she began an apprenticeship at Battersea Arts Centre in Community Arts Administration and was offered the role of Junior Producer in 2016. In the same year, she was accepted onto the Old Vic 12 programme out of 1400 applicants, and given a year-long attachment to the venue where she produced Joe White’s play Pagans, performed by Simon Kunz, Lolita Chakrabati, Gary Wood, Sophie Melville and Geoff Breton.

In 2017, she was part of the Runner Up team for the JMK 2017 Award with debbie tucker green’s random and became Executive Producer (UP NEXT) at Bush Theatre, conceptualising and delivering BABYLON Festival – a week-long celebration of Black and Brown peoples’ influence on London culture.

Tobi has produced short films Wishbone and Secret Life of Gs, written and directed by Caleb Femi, has worked for and collaborated in producing and programming exceptional British talent at cultural events such as AFROPUNK London, gal-dem: women’s international weekender, Brainchild Festival and #MERKY Books Live, and is currently produced J’Ouvert at Theatre503.

As well as delivering workshops, keynote speeches and panel discussions, Tobi is the founder of Black Ticket Project – an initiative creating access to the arts for Black young people, and was named as part of The Stage 100’s 2019 ‘Most Influential Figures Working in the UK Theatre and Performing Arts Industry’.

Tobi won the ‘Inspiration of the Year’ Award at Stylist Magazine’s first Remarkable Women Awards, received recognition from The Mayor of London as part of the Hidden Credits campaign and has delivered a talk for TEDxSussex University.

His writing has been published in Rialto Magazine, Bare lit Anthology, 10: Poets of the New Generation Anthology, Tales of Two Londons Anthology and Safe: On Black British Men Reclaiming Space.

In 2019 Yomi was awarded one of three Jerwood Compton Poetry Fellowships.

COAT, Yomi’s first one-man show, has toured nationally to sold-out audiences and he is currently working is his first poetry collection and second show.