Portrait & If I Were Me

by Racheal Ofori
Presented by Fuel

A frank, fun and provocative look at the trials and tribulations of modern life seen through the eyes of a young black woman. Inspired by Racheal’s own experiences, Portrait uses music, poetry and humour to examine identity and role models and challenge cultural stereotypes.

Written and performed by Racheal Ofori. Directed for Edinburgh and UK tour by Kate Hewitt.

If I Were Me

A copywriter at an advertising agency, fading into the background of a pale office wall, he rearranges words until they work. But life isn’t so easily edited.

Phillip doesn’t want to be Phillip. But what if he never really has been? What if Phillip is yet to become Phillip?

And then there’s Person, who isn’t anybody… yet.

Award winning company ANTLER return to RADAR with If I Were Me, a playfully surreal portrayal of the performance of identity.

If I Were Me won the Pulse Suitcase Prize in 2014 and was developed with support from Arts Council England, Old Vic New Voices Lab and New Wolsey Theatre.

This is a past event
Bright and punchy...A visual treat.
Broadway Baby on If I Were Me
‘Treads into the territory of truly exceptional theatre’
Three Weeks on Antler's Where the White Stops
Fresh, funny and utterly vital
The List on Portrait
'Gorgeously bizarre.’
Exeunt on If I Were Me
Compellingly astute… captured in a voice that’s critical yet fearless, and ultimately uplifting
The Scotsman on Portrait
‘Inventive, amusing, surreal piece by a smart young company’
The Stage on If I Were Me
Racheal Ofori is a fantastic performer, making it look easy to singlehandedly captivate an audience for an hour
Three Weeks
‹ › ×

If I Were Me by Antler 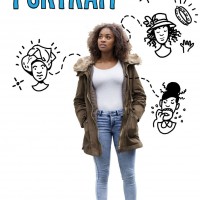