When the Thames bursts its banks and submerges London, the north and the south of the city become separated. Myths abound about ‘the other side’ – is it really better?

Four sets of teenagers ignore the risks of the treacherous crossing, to find out whether the other side is all it’s cracked up to be.

The drowned commuters of the Circle Line conjure memories of the past. These Bridges by Phoebe Éclair-Powell looks at a fearful future and seeks to show that if we stick together, we may just survive it all.

This is a past event
‹ › ×
Writer
Phoebe Eclair-Powell 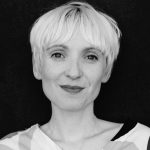 Phoebe Eclair-Powell is a writer from South East London, and the most recent winner of the Bruntwood Prize for her play Shed:Exploded View. In 2015, Phoebe’s debut play, WINK at Theatre 503 received rave reviews and four Off West End nominations including ‘Most Promising New Playwright’. Her play Fury was runner up for the Verity Bargate Award 2015, and subsequently won the Soho Young Writer’s Award and had its run extended at Soho Theatre due to popular demand. It also received an ‘Offie’ nomination for ‘Best Play’.

For 2016-17 Phoebe was the resident playwright at Soho Theatre through the Channel 4 Playwright scheme.  During which she had two Edinburgh shows, Torch with Jess Edwards (Underbelly, New Diorama) and Epic Love and Pop Songs (Pleasance Theatre).  In 2017 Phoebe adapted The Picture of Dorian Gray for the Watermill Theatre, which toured schools and village halls. In 2018, Phoebe’s play These Bridges was part of the National Theatre’s Connections Festival.

Prior to this, Phoebe completed the Channel 4 Screenwriting course. She was also on the Soho Writers’ Lab for 2014/15. Phoebe was a previous member of the Royal Court Young Writers and the Royal Court invited group under Alice Birch. Phoebe was commissioned by the BBC writers-room drama programme with Sid Gentle Films and took part in Nick Frost and Simon Pegg’s YA incubator at their company Stolen Picture. Phoebe has written for award-winning Channel 4 continuing drama Hollyoaks.

Phoebe is currently under commission with Freemantle Australia, Newcastle Live Theatre and Paines Plough Roundabout. Phoebe is working on several original TV shows as well as writing episodes on other shows for Kudos, Twelve Town and Slim production.  As well as writing, Phoebe has worked as an Assistant Script Editor and researcher for Kudos Television on Sky series Tin Star (1, 2 & 3) and as Assistant Script Editor for FILMWAVE on YA Netflix show A Letter to The King.  Phoebe was also assistant to the writer Patrick Barlow on two projects – Ben Hur at the Tricycle and A Christmas Carol at the Noel Coward Theatre (Olivier Award nominated for ‘Best Comedy’).