The international online premiere of Benedict Lombe’s Lava, filmed live at the Bush Theatre and streaming direct to the comfort of your living room.

When a woman receives an unexpected letter from the British Passport Office, she is forced to confront an old mystery: why does her South African passport not carry her first name? Armed with the wisdom of  favourite 90s TV shows, she sets out on a journey that will take her back to the turmoil of Mobutu’s Congo, growing up in post-Apartheid South Africa, moving to Ireland and finding love in a hostile England.

As her journey becomes inextricably linked with the tides of global history, how far will she go to unravel the truth? By turns wickedly funny and strikingly lyrical, Benedict Lombe’s Lava is an explosive debut that will turn the way you see the world on its axis.

Looking to book for live performances of Lava?

Lava – Online is streaming worldwide, so you can watch it from anywhere. The performance will begin promptly at 2:30pm or 7:30pm. From the date of the performance, the film will be available to watch for 48 hours after.

Looking for show guidance and content warnings?
Read our Lava pre-show information or email [email protected] if you have specific concerns or questions.

Lava is made possible thanks to the support of the Government’s Culture Recovery Fund, which enables the venue to produce work from April to June 2021.

Each ticket holder will have access to the same view, regardless of the price you pay.

We’d be grateful if you could consider paying close to what you might normally spend on a theatre ticket. Your support is vital to help secure the future of our theatre in the coming year – each and every penny will make a difference.

If you are planning to watch with more than one person, please consider adding a donation to cover their ticket.

All performances are captioned (English - UK) 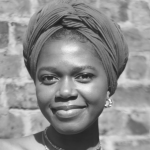 Benedict Lombe is a Congolese-British writer and theatre-maker based in London.

She has been on attachment at the Bush Theatre and has been on a residency at Theatre503 as one of their five writers for 2019/2020. She has produced digital work for the Bush as part of Protest: Black lives Matter, Papatango Theatre Company as part of their Isolated But Open series, and a site-specific piece as part of Damsel Productions’ Outdoors season. She has been part of the BBC Writersroom cohort, has been shortlisted for the Papatango Playwriting Award and the Royal Court & Kudos TV Fellowship, amongst others.

She is currently working on developing original TV projects, with a focus on boldly reclaiming diasporic stories that were never allowed to be told, with the full shades of nuance and truth they always deserved.