The Believers Are But Brothers

Writer and theatre maker Javaad Alipoor presents his 2017 Scotsman Fringe First Award winning play as part of our 2018 Season. He is Resident Associate Director at Sheffield Theatres, and an Associate Director of Theatre in the Mill. Javaad’s  work comes from discussions and workshops with communities that don’t usually engage with mainstream theatre. In The Believers Are But Brothers, Javaad explores the smoke and mirrors world of online extremism, anonymity and hate speech.

An electronic maze of fantasists, meme culture, 4chan, the alt-right and ISIS

We live in a time where old orders are collapsing: from the postcolonial nation states of the Middle East, to the EU and the American election. Through it all, tech savvy and extremist groups rip up political certainties.

Amidst this, a generation of young men find themselves burning with resentment, without the money, power and sex they think they deserve. This crisis of masculinity leads them into an online world of fantasy, violence and reality.

The Believers Are But Brothers envelops its audience in this digital realm, weaving us into the webs of resentment, violence and power networks that are eating away at the structures of the twentieth century. This bold one-man show explores the smoke and mirrors world of online extremism, anonymity and hate speech.

It is co-directed by Kirsty Housley (The Encounter, Complicite; Myth, The RSC) and has been shortlisted for The Stage Innovation Award 2018.

“Full of dark poetry and sheer analytical power”
The Scotsman ★★★★

“A window into the frightening virtual world”
Time Out ★★★★

This is a past event
"masterly... one of the most fascinating shows I have seen in an age"
Financial Times
"Full of dark poetry and sheer analytical power"
The Scotsman
"A multimedia feast of a show"
The Independent
“Boldly conceived and gut-twistingly immediate"
The Stage
Fringe First Award Winner 2017
The Scotsman
‹ › × 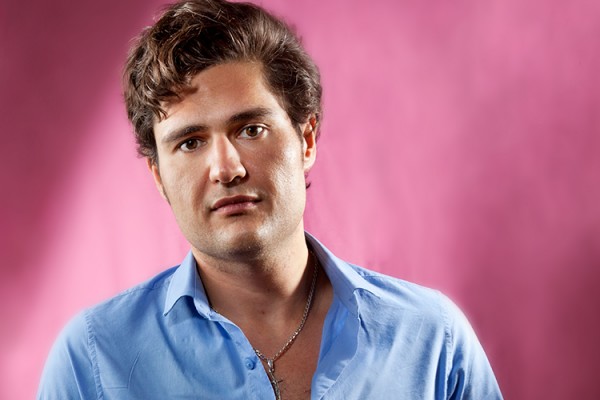 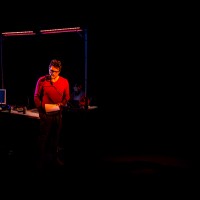 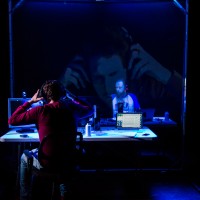 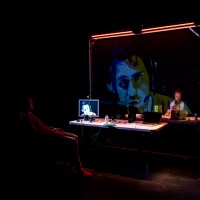 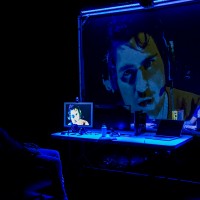 The Believers Are But Brothers, Javaad Alipoor, Transform 17. Photo: The Other Richard 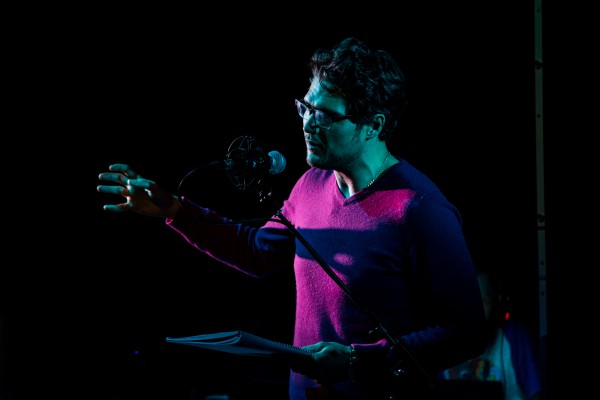 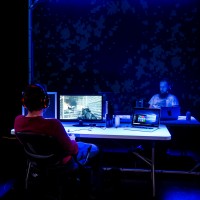 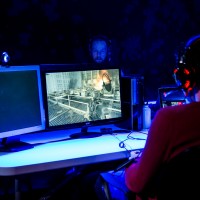 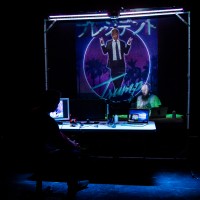 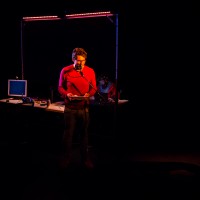 Adam has spent last six years working with a passion in film and video industry as a Creative Producer. During this time he’s developed, produced and delivered over a hundred video for a social media platforms – advertising, fashion videos, content video, corporate, creative and music videos, for diverse clients in many countries, including worldwide brands. He is developing artistic projects of multimedia and visual-art for exhibitions and theatre’s plays in UK, Italy, Poland and UAE.

As an artist/maker, he co-directs Dens & Signals (Feast of the Dead, The Wake, A Thousand Shards of Glass). He’s an associate artist of Coney.

Chris was a founder member of Unlimited Theatre and still works and tours with the company. He is also an Artistic Associate of live art/theatre company Third Angel. He has worked with, among others, Forest Fringe, Slung Low, Chris Goode, RashDash, Belarus Free Theatre and Portuguese experimental company mala voadora – his fourth piece for the company, Your Best Guess opened at Lisbon’s Almada festival in 2015. He also plays guitar in Lucy Ellinson’s political noise project #TORYCORE and works with the National Student Drama Festival.

Chris is an Associate at the Royal Exchange, Manchester. His play for the Exchange, There Has Possibly Been An Incident was selected by Simon Stephens for the Stuckemarktin Berlin, 2014.  It has been produced in Denmark and Sweden, on German radio, and is has been produced in Saarbrucken and Vienna, with more productions in the pipeline. He has an ongoing collaboration with director Rachel Chavkinfrom New York’s TEAM. Their first piece Confirmation, is currently touring internationally and they are starting to develop their next. His other main collaborator is poet Hannah Jane Walker with whom he made The Oh Fuck Moment and I Wish I Was Lonely.

Currently, Chris is touring Confirmation and Unlimited’s Am I Dead Yet? He is writing a new version of Beowulf for the Unicorn Theatre, and has written a new piece, Victory Condition, for the Royal Court which will be produced there in 2017. He recently wrote Chorus for The Iphegenia Quartet at The Gate Theatre. He is also working on The Mysteries for the Royal Exchange with Sam Pritchard, who directed There Has Possibly Been An Incident. His piece for director Rachel Bagshaw, The Shape of the Pain, is currently in development.

The texts for There Has Possibly Been An Incident and Confirmation, as well as work with Hannah Jane Walker, are published by Oberon Books. His work with mala voadora is published in English and Portuguese. Chris is the Arvon mentor for playwrighting, 2016/17 and one of the three Jerwood New Playwrights 2017 by the Royal Court Theatre.

Heather Knudtsen is currently studying for her masters in directing at the Guildford School of Acting, where she most recently directed the devised movement project The Man Who Wanted To, and was the dramaturge for Blood Wedding directed by Jaq Bessell. Before moving to England, Heather lived in the United States, where she was a directing intern at the Barter Theatre in Virginia, and worked as a theatre director and publicity coordinator at the Jonesborough Repertory Theatre in Tennessee. Prior to moving to the US for university, Heather lived in the Philippines. Directing credits include Trifles: Barter Theatre, A Defenseless Creature: Milligan College, and The 39 Steps and Noises Off at the Jonesborough Repertory Theatre.

Jack is a filmmaker who works within theatre, and has created imagery and projection design for a diverse range of shows including The Rest of Your Life (Bush Theatre), The Light Princess (Tobacco Factory Theatres), site-specific piece The Stick House (Raucous), Wulf (Bristol Old Vic Ferment), Educating Rita (Liverpool Everyman & Playhouse) and a raft of Bristol Old Vic shows including Messiah, Talon, and Pigeon English. 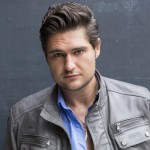 Javaad Alipoor is a writer, director and theatre maker. As Artistic Director of Northern Lines he works within hard-to-reach communities to make high quality professional practice shows that respond to big international political questions for theatre and non-theatre spaces. He is Resident Associate Director at Sheffield Theatres, combining his associateship with his Arts Council funded role as part of the Change Makers Programme, where he will be directing One Flew Over the Cuckoo’s Nest in Summer 2018. His latest work is the Fringe First winning The Believers Are But Brothers examines violence, masculinity and extremism (supported by HOME, National Theatre Studio, Ovalhouse, TRANSFORM Festival and Theatre in the Mill). Previous work includes Orgreave: An English Civil War, about the Miners’ Strike and the Arab Spring and My Brother’s Country – about murdered Iranian pop icon Fereydoun Farrokhzad.

Javaad Alipoor is a writer, director and theatre maker. As Artistic Director of Northern Lines he works within hard-to-reach communities to make high quality professional practice shows that respond to big international political questions for theatre and non-theatre spaces. He is Resident Associate Director at Sheffield Theatres, combining his associateship with his Arts Council funded role as part of the Change Makers Programme, where he will be directing One Flew Over the Cuckoo’s Nest in Summer 2018. His latest work is the Fringe First winning The Believers Are But Brothers examines violence, masculinity and extremism (supported by HOME, National Theatre Studio, Ovalhouse, TRANSFORM Festival and Theatre in the Mill). Previous work includes Orgreave: An English Civil War, about the Miners’ Strike and the Arab Spring and My Brother’s Country – about murdered Iranian pop icon Fereydoun Farrokhzad.

Kirsty Housley is a theatre director, writer and dramaturg and she is an associate of Complicité. Work with Complicité includes: The Encounter (UK/International Tour – Co-Director), Seen and Not Heard (Southbank Centre), A Pacifist’s Guide to the War on Cancer (National Theatre – Dramaturg) and War and War (Pleasance). Other recent directing includes: The Believers Are But Brothers (Ovalhouse, WYP and Northern Stage – Co-Director); Wanted (Chris Goode and Company /Transform Festival/WestYorkshire Playhouse), Walking The Tightrope (Offstage andTheatre Uncut), All I Want (Live Theatre, Leeds Libraries and Jackson’s Lane) and Mass (Amy Mason / Bristol Old Vic / CPT). She is currently collaborating with Bryony Kimmings, Complicité, The Unicorn and the Bush Theatre. Her play Myth (written with Matt Hartley, from an original idea from Kirsty) opened at the RSC in Spring 2017.

Luke is an independent creative producer who works with artists and organisations that challenge and excite their audiences and who aren’t afraid to ask difficult questions. He works outdoors, indoors, online and across the globe, wherever art can happen. Luke is the producer for Jamie Wood (O No!, I Am A Tree), Javaad Alipoor, Submerge Festival and Mayfest Radio. He has lectured and sat on panels on producing, sustainable working practices and project management for University of Bristol, Norwich University of the Arts, Derby University, Lincoln Performing Arts College and Bath Spa University. He has produced projects for Situations & Theaster Gates, Mayfest, Norfolk & Norwich Festival and a wide range of independent artists.

She is an Associate Artist of the Royal & Derngate Youth Theatre, ISTA, Shakespeare Schools Festival and the Royal Exchange Theatre and the Artistic Director of the Women’s Comedy Collective in Bradford.

Natalie is also a PhD student at Manchester Metropolitan University, where she is researching women’s voices in comedy.

Simon is a composer and sound designer based in Stroud, Gloucestershire. He has been making music and creating sound design for theatre and film for over 15 years, working with theatre companies including Headlong, Old Vic Productions, Tiata Fahodzi, Theatre Hullabaloo & Cirque Bijou.